The Montessori method of teaching aims for the fullest possible development of the whole child, ultimately preparing them for life’s many rich experiences. Complemented by her training in medicine, psychology, and anthropology, Dr. Maria Montessori (1870 – 1952) developed her philosophy of education based upon actual observations of children.

Children pass through sensitive periods of development early in life. Dr. Montessori described the child’s mind between the time of birth and six years of age as the “absorbent mind”. It is during this stage that a child has a tremendous ability to learn and assimilate from the world around them, without conscious effort. During this time, children are particularly receptive to certain external stimuli. A Montessori teacher recognizes and takes advantage of these highly perceptive stages through the introduction of materials and activities which are specially designed to stimulate the intellect.

Encouraged to focus their attention on one particular quality, the child works at their own optimum level – in an environment where beauty and orderliness are emphasized and appreciated. A spontaneous love of “work” is revealed as the child is given the freedom (within boundaries) to make their own choices.

Montessori teachers are trained facilitators in the classroom, always ready to assist and direct. Their purpose is to stimulate the child’s enthusiasm for learning and to guide it, without interfering with the child’s natural desire to teach themself and become independent. Each child works through his individual cycle of activities and learns to truly understand according to his own unique needs and capabilities.

Everything in a Montessori classroom has a specific use or purpose. There is nothing in the prepared environment that the child cannot see or touch. All of the furniture and equipment is scaled down to the child’s size and is within easy reach.

A quality Montessori classroom has a busy, productive atmosphere where joy and respect abound. Within such an enriched environment, freedom, responsibility, and social and intellectual development spontaneously flourish! 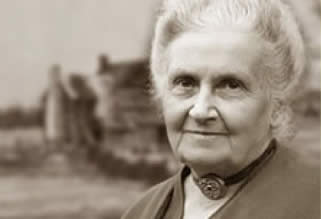 About the Founder, Dr. Montessori

Maria Montessori is often referred to as “ahead of her time.” Born in Italy in 1870, Maria Montessori moved to Rome with her parents in 1875 at the age of five. Although her father Alessandro embraced traditional views of female education, it was the more liberal approach of her mother, Renilde Montessori, that encouraged Maria Montessori to explore her natural inclination to learn, regardless of the social restrictions placed on women in the male-dominated society of the day. In so doing, Renilde played an active role in her daughter’s upbringing, and indeed, the whole philosophy behind what is now known as the “Montessori Method.”

Studies in math, physics, natural sciences, biology and medicine led Maria Montessori to apply to the College of Medicine at the University of Rome, and she became the first female certified physician in Italy in 1896, graduating at the top of her class. In addition to her duties as a doctor, Maria Montessori conducted research work in psychiatric medicine and continued her education in philosophy, psychology and education. She was appointed professor of anthropology at the University of Rome in 1904.

Throughout, her interest in the development of children grew – first from her experience with disabled children and the deplorable state of their care at the time, then further with mentally-challenged children in her care. As she learned from the work of others already accomplished in the area of early childhood education, her own theories evolved, embracing elements, ideas and methods of all disciplines she had studied.

In 1906, at the age of 36, Maria Montessori founded the first Casa dei Bambini, or “Children’s House” for children of the industrial revolution’s working-class in one of the city’s worst slum districts. With some 60 children in her care, Maria Montessori began their education by instructing the older children on how to help out with everyday chores. Sense materials that she had developed previously were introduced, and to her surprise, Montessori discovered how naturally young children adapted and enjoyed learning everyday tasks. The structure of work and constructive activity gave the children a sense of self-worth that they had never before experienced.

One of Dr. Maria Montessori’s first major hurdles to improve the lives of these children was accomplished by encouraging parents to recognize that their children were special and of great value. From this reverence for the individual beauty and potential grew the Montessori Method. Critical periods of early childhood development were identified through her observations, and the methodology evolved to address these periods with age-appropriate learning tools and activities. Further development of the methodology embraced what Montessori described as the “cosmic education” – where children would be given the environment and guidance to become the peacemakers of the future, existing in harmony with all living beings in a sustainable world.
From this time to her death in 1952, Maria Montessori continued her work, which became widely recognized and embraced throughout the United States, Europe, and India. She conducted and founded training courses on these continents, established a research institute in Spain, and developed Montessori Training Centers in the Netherlands and London.

Overall, what makes this method of learning so different compared to the conventional form of education we have today is that the teacher does not stand in front of the class and teach each child the same lesson all at once. Each child is allowed to learn at his/her own rhythm in a way where they feel as though they are in fact not learning or being taught.

Montessori called this way of teaching “preparing the child for success”. The teacher is there to guide your child through small Exercises in which your child will succeed. Through time, the Exercises rise in difficulty but because the progression is so well thought out, the child never feels as though learning is a struggle.